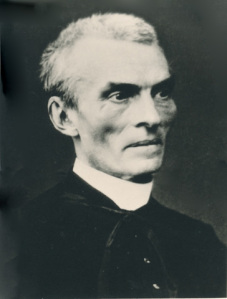 The Blessed Sacrament Congregation was founded by St Peter Julian Eymard (1811–1868) as a new religious community dedicated to the ‘blessed sacrament’ or eucharist.

Eymard (pronounced ‘Ay-mard’) was a French priest who had ministered in the diocese of Grenoble before joining the Society of Mary (Marist Fathers) in 1839. By 1844 he was provincial in charge of Marist communities in France and overseas.

Throughout his life, Eymard had a strong attraction to the eucharist. As a priest, he opposed the backward thinking of his day which suggested that communion was a reward for the virtuous, not to be received often or by anyone ‘unworthy’.

‘You take communion to become holy, not because you already are,’ he preached.

Eymard became familiar with the practice of sustained eucharistic worship during a visit to Paris in 1849, when he met with members of the Association of Nocturnal Adorers who had established exposition and perpetual adoration of the Blessed Sacrament at the Basilica of Our Lady of Victories.

After praying at the Basilica of Fourvière on 21 January 1851, Eymard moved to establish a Marist community dedicated to eucharistic adoration. His superiors disapproved, transferring him to the Marist College at La Seyne-sur-Mer. Eventually, Eymard resolved to leave the Society of Mary to begin his new religious congregation with the diocesan priest Raymond de Cuers.

When Pope Pius XI granted a Decree of Approbation in 1863, the Congregation had twenty-eight members, among them the famous sculptor Auguste Rodin (1840–1917). Their mission was not confined to exposition and perpetual adoration. It included a ministry to priests, and to the poor and working classes, and particularly to the destitute children or ‘ragpickers’ who were living in the ghettoes of Paris.

In declining health, Eymard lived to see his own Congregation begin its expansion outside France in the mid 1860s. His mystical life deepened during his final years, as he came to recognise what he called the ‘gift of self’ which involved an act of total self-surrender based on the model of Christ.

Peter Julian Eymard was canonised a saint on 9 December 1962 and is known today as the ‘apostle of the eucharist’. His feast day is celebrated each year on 2 August.

Visit the new website – eymardianplaces.com – to experience an interactive pilgrimage.